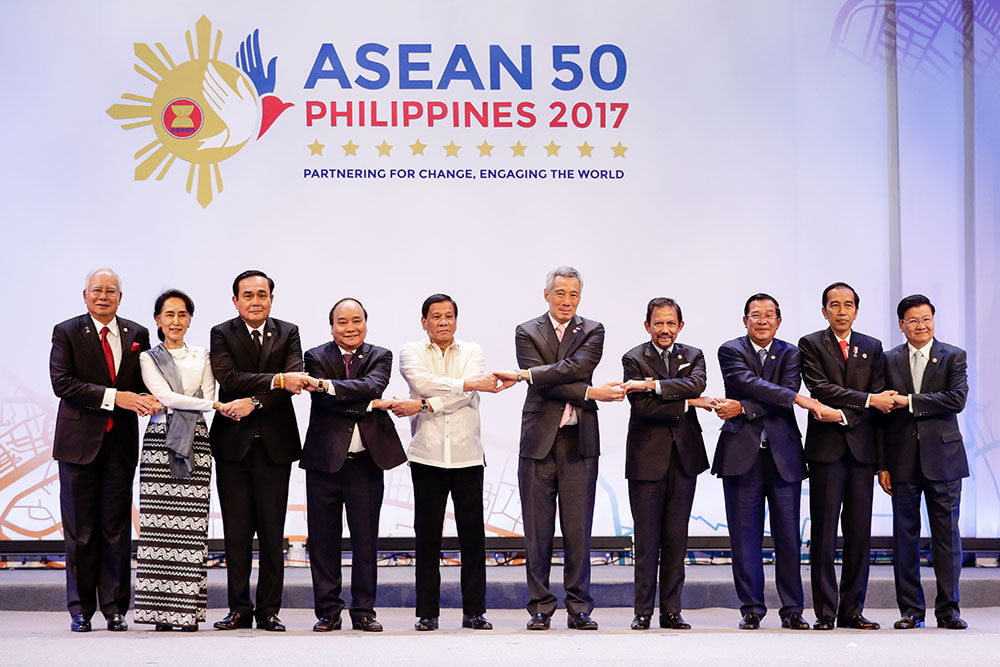 Economic integration and diplomacy have been at the forefront of the international scene for so long that countries make a constant effort to sustain these among their allies and other states they are involved with. This is manifested in various political and economic institutions that aim to bring regions of nations together toward a common goal for the sake of their own national interests as well as sound regional political ties and economic development.

The Association of Southeast Asian Nations (ASEAN) is one such institution. Founded in 1967, the ASEAN’s initial purpose was to promote stability among the first five member states in the aftermath of the Cold War. Over the years, the member-base expanded and the focus of the association shifted primarily towards economic and trade growth via free trade agreements among the nations it encompasses as well as those outside Southeast Asia.1

Last November 13-14, 2017, ASEAN representatives and dialogue partners convened in Manila for the 31st ASEAN Summit, where they realigned their general direction as an organization and discussed their positions on the issues that plague their countries. Among these were the recent rise of radicalization alongside the plight of migrant workers and women in their borders, as well climate change, poverty, and the youth.2

One of the main agenda was the economic outlook they envisioned regionally and globally, and how they planned to attain these objectives over the next several years. Formed together with the ASEAN Business Advisory Council, below are the economic highlights they achieved over the two-day summit, as well as their implications to the Philippine economy in the near future.

According to the Asian Economic Integration Report 2017, The Regional Comprehensive Economic Partnership (RCEP) would bind the 10 ASEAN members and the six economies that have existing FTAs with ASEAN, namely Australia, China, India, Japan, Republic of Korea, and New Zealand.3 Conceptualized during the 2012 East Asia Summit in Phnom Penh, Cambodia, the primary objectives of the RCEP are to improve market access and facilitate smoother trade among the ASEAN member states and partner countries by eliminating tariffs in goods and services, and increasing investment flows and protection of intellectual property among others.4

In the 31st ASEAN Summit, the RCEP leaders released a joint statement outlining the agreement in its current form. The document so far contains guidelines and initiatives for the various areas covered in the outline, ranging from trade and movement of persons and goods, to investment and competition among enterprises, and even government procurement and dispute settlement. The RCEP leaders highlighted the potential of the partnership given that it would be joined by 16 countries that make up almost half of the world population, roughly 30% of global output, 28% of global trade, and 20% of foreign direct investment inflows in the last year. According to their joint statement, the RCEP “will need to consolidate the ASEAN+1 FTAs and build new economic linkages between ASEAN’s FTA Partners that do not have bilateral FTAs with each other,” all while taking into consideration the varying levels of development of the participating countries so that there can be flexibility in how they are addressed in the partnership.5

What does the Philippines get out of the RCEP?

According to Cororaton (2015), the partnership will bring ultimately be beneficial to the country, given the projected expansion in exports from the construction, machinery, and services sectors resulting from the reduction in trade barriers, as well as an optimistic inflow of $2.4 billion worth of FDIs given its current circulation within the partner countries. Increased competition from foreign enterprises will lower commodity prices, making goods cheaper for consumers, and hence leading to higher real household incomes for Filipino citizens and lower poverty in the country. Though these stand as of now as projections, these are the target benefits for the Philippines as the RCEP is perfected from 2014-2023.6

This year the ASEAN Investment Report 2017, a collaborative project of the ASEAN Secret and United Nations Conference on Trade and Development (UNCTAD) on investment in the region, was released during the ASEAN Business and Investment Summit held last November 13.

Highlights from the report include data on foreign direct investments within Southeast Asia, particularly how inflows from dialogue partners and intra-ASEAN investment increased over the past year, alongside high FDIs into the ASEAN region as a whole despite its decline to $97 billion due to the decline in FDIs into developing countries.

(For more data on the flows of FDIs, refer to ASEAN at 50: A Historic Milestone for FDI and MNEs in ASEAN7. The commemmorative publication highlights the success of the ASEAN in attracting foreign direct investments over the past fifty years)

Another focus of the report was the state of economic zones in the region, given how these can ease and speed up the facilitation of investments and development of industrial clusters. According to the report, “these zones, ranging from free trade zones, export processing zones, IT parks to mega special economic zones, have played a significant role in the socioeconomic development in the region and in attracting FDI. Given the rapid economic growth and demand, ASEAN Member States continue to develop more economic zones to boost FDI.”8

Historically, the Philippines has evolved from just having four government-owned EPZs before the development of the PEZA, to many others that are being developed primarily by the private sector. The increase in economic zones has made it easier for foreign firms to enter the Philippine market so that they can operate within the country, as well as for FDIs to enter and improve the overall business climate in these areas.

Key characteristics among Philippine economic zones were observed to be the following: high-quality infrastructure facilities, easier access to road networks and ports or airports as a result of their strategic location, and dominance of foreign companies. Over the years, manufacturing has been overtaken by the the services sector, which comprises mainly of IT-related and BPO activities provided by Japanese and American firms respectively.

FDIs in the services sector have increased over time for two reasons. First, operation costs are much lower given that the labor force is already more or less English-speaking, and the “customer contact points” are much easier to set up in an efficient manner. Second, economic zones have increased logistics business opportunities in the country, making it easier for foreign firms in logistics services to station themselves in these areas.

Outlook for the Philippines

Based purely on the data and projections, the future of the Philippine economy looks bright. However, just like how the ASEAN ensures economic and political stability to ensure regional growth, the Philippine government must also take into account both aspects when assessing the current state of the country and what to do from there.