In the realm of engineering, a failure mode typically refers to where a material or system ceases to fulfill physical or mechanical requirements. These are some common examples of failure modes: rupture, corrosion, excessive deflection, warping, yielding, fatigue, etc. In practice, however, failure also encompasses overdesigning or over-engineering, and poor evaluation of investment alternatives for engineering projects. To sum up in two words: being uneconomical.
​
We’ll start off by discussing over-engineering. Imagine a scientist building a sentient robot butler just because he needs the butter to be passed. Obviously, this is a massive exaggeration, but the point here is that by overdesigning, you’re essentially creating the same problems as the scientist: (1) the cost, complexity, and time required in making are excessive; (2) the operational and maintenance costs are definitely not worth it either (but hey, I don’t know your life. Maybe you really, really need a sentient robot butler to pass the butter).


If you disagree with me, this guy must be your hero
Credit: Joseph’s Machines
​
​Perhaps a more realistic instance of overdesigning should be discussed. In designing form sections (e.g. beams, columns), it is generally uneconomical to model each individual beam to its exact loading specifications. The monetary and temporal costs in forming different beams far exceeds the savings in materials. A fundamental concept in engineering economics is that one peso received today is more valuable than one in the future; therefore, rapid construction is most desirable for the investor in the project. Additionally, the usually associated increase in complexity would mean a greater likelihood of design and construction error. Simpler designs that meet the critical requirements generally would give a floor system an economical structure with a more uniform, attractive appearance.

Now let’s move on to selection of project investments in engineering. It requires both financial and economic analyses. Oversimplifying the difference between the two, economic analysis is viewed from the perspective of economy/society concerned with the benefits and costs; financial analysis is viewed from the perspective of a firm/agency concerned with revenues and expenses. It’s worth noting that undertaking either utilizes similar methods.
We first evaluate which among the alternatives are not viable. These are projects that lack net generation of economic and financial return (determined through any of several methods with identical conclusions in acceptance or rejection) over the project’s useful life. Needless to say, a project that won’t meet engineering specifications and requirements can’t be considered an alternative, let alone a viable one. A machine should at least pass the breakeven point before the end of its useful life. Taxpayers would expect benefits from a highway project to commensurate with the estimated costs associated such as costs in design, construction, maintenance, and periodic upgrades. Occasionally, all your alternatives are projected as uneconomical, so you consider a do-nothing alternative (usually when the aim of a project is simply to replace an adequate, existing one).

Viable alternatives are brought to equivalent design lives for valid comparison. You usually would work with a benefit-to-cost ratio (BCR) or an adjusted internal rate of return (AIRR). Because all these are considered viable, alternatives would at least have BCRs greater than 1, and AIRRs greater than the minimum attractive rate of return (MARR) for their respective methods. You rank your alternatives in descending order of BCRs or AIRRs. If your alternatives are mutually exclusive, you’d generally would want to select the highest in rank with considerations in consequences of forgoing other alternatives. Otherwise, you can fund each by rank until budget allocated has been exhausted in order to maximize net benefits.
Alternatives fall apart without precise estimates on costs. How are these costs estimated in the first place? Well, cost estimation is refined throughout stages of development of the project:

Information is always important to have in estimation whether it’s on project requirements, references (e.g. DPWH technical specifications, and industry standard estimation forms), or prices (which may be time-sensitive).

With our design finalized, we can proceed to the actual bid. We determine the lowest qualified bidder. It is imperative that the bid is without unacceptable substitutions in specifications and date completion. This bidder must also be appropriately licensed, bonded, and insured. These requirements are especially relevant in large scale projects such spacecraft: 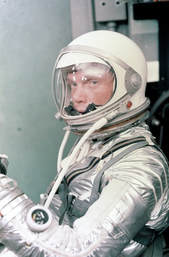 ​“I felt exactly how you would feel if you were getting ready to launch and knew you were sitting on top of 2 million parts — all built by the lowest bidder on a government contract.” - John Glenn on his launch into Earth’s orbit


Credit: NASA
​
Of course, NASA wouldn’t compromise safety requirements just for the lowest bidder. It’s just a thought that you can’t keep from crossing your mind sometimes when your life is on the line like that. He did go on to finish his mission and become the first American to orbit the planet. John was sort of a worrywart anyway; according to the New Mexico Museum of Space History he even carried a note translated into several languages that reads, "I am a stranger. I come in peace. Take me to your leader and there will be a massive reward for you in eternity." just in case he splashed down in the remote Pacific seas.

No project, no artwork, no goal at all is completed without constraints. Perhaps “constraint” invokes a misleading connotation. We should see constrains not as limitations that hinder our creative liberty, but a degree of definition that makes our ideas real. Economic constraints are among the most prevalent of these defining factors. We define what materials and resources are available, how much the cost of our project is, and when we can reap the desired outputs. This underlying principle of constraint we’ve been discussing guides us not only to avoid failure, but to definitive success.
Failure is never just skin-deep. There’s so much more that can go wrong than buildings collapsing, towns flooding, or artificial intelligence rebelling. Sometimes, failure is the building that doesn’t get built, the town that never was, the unborn A.I. It’s the over-allocation of resources, the oversight on sustainability and alternatives.
​
Every person should have some sense of economics, and engineers are far from exempt.